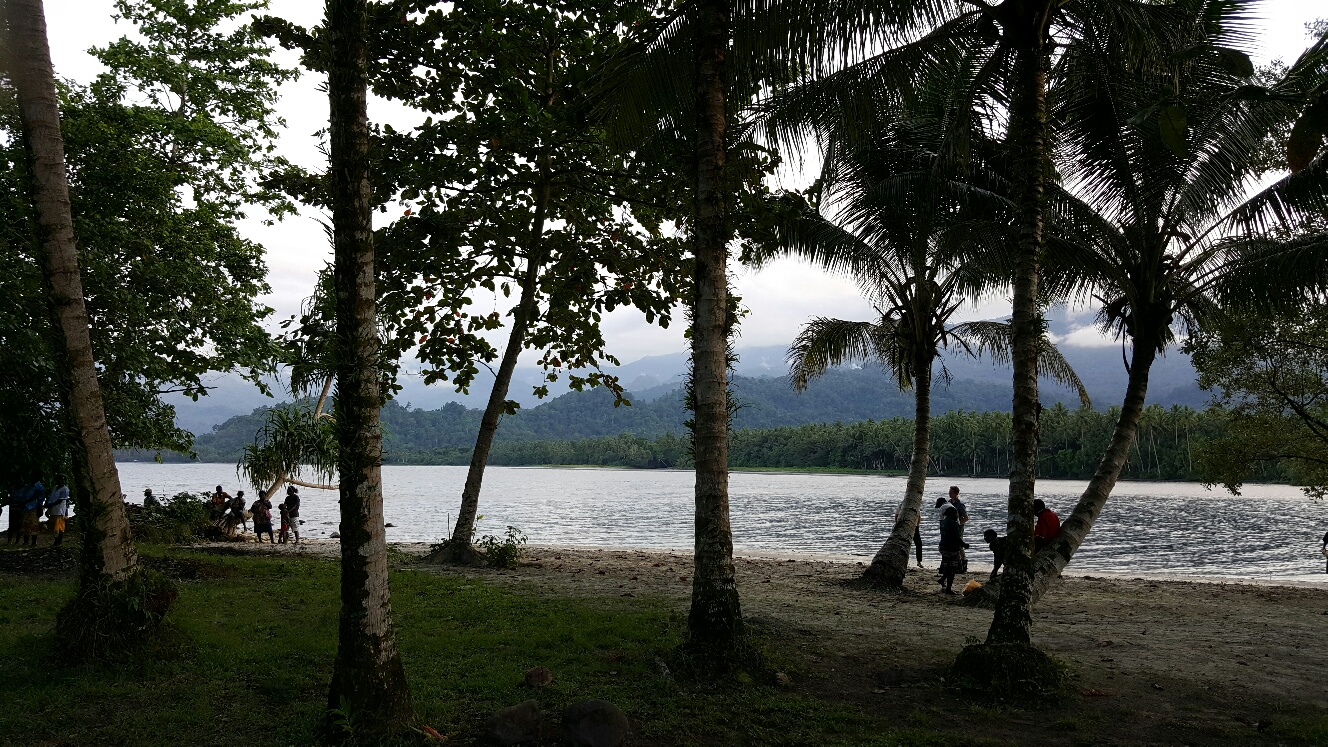 When the invitation came, Peter set about persistently but gently persuading me to go to the Bougainville Chocolate Festival in July 2016. I could not ignore his reasoning –

– “we would make new contacts“;

– “we would learn new things”,

– “we would have new experiences“,

– “we could get Bougainville beans and start a new line” etc. etc.

Given this was the inaugural chocolate festival in Bougainville “it would be a good opportunity to be in from the ground floor” he continued to say.

So with some trepidation and reluctance, I agreed to the trip – after all, this was one of the joys of the business – being able to visit far-flung tropical paradise islands in search of the best cocoa beans to make our chocolates. Who wouldn’t like that?

We left cold, cold Canberra on a Sunday morning (-5 degrees) on the first flight out (O Dark Hundred, we call it) which was just as well because it was foggy (and would muck up the flight schedules). Arriving in Port Moresby that afternoon to the warm sunshine, I was buoyed by the idea of spending 6 days in a tropical paradise. At the end of the short drive to the Airways Hotel, we were warmly greeted at the gates by the hotel guards. On checking in after a long flight, we happily took the advice to not go wandering but enjoy the hotel’s luxurious surroundings and settled in for the evening. We were told that the hotel was the best hotel in Papua New Guinea – which, was shortly confirmed by the number of photos displayed in the lobby, of world leaders who had stayed at the hotel.

The next day, our adventure began. Bougainville should only be about a three hour plane ride from Port Moresby, but ….. Peter accidently booked us on the ‘milk run’ and we spent a total of six hours in flight stopping at numerous airports (Lae, Kimbe and Kokopo) throughout the islands. 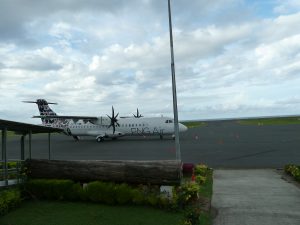 Arriving late that afternoon in Kieta airport in Arawa (central region of Bougainville), with their beautiful beachfront airstrip, I was reminded of Fantasy Island (I’m really showing my age, now…) and fully expecting to be greeted by Mr Roarke, Tattoo and the crew. The airport was basic and fairly typical of the region with gorgeous gardens of tropical flowers surrounding a basic corrugated iron building. Our luggage was wheeled in and deposited onto a raised bench (as the luggage carousel) for us to collect. 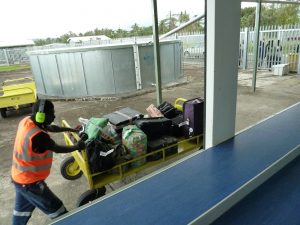 Driving into Arawa, I was reminded of my days as a child in Malaysia. The road was partially sealed, flanked by tall grass and the hillsides densely covered in overgrown tropical jungle. The humidity in the air, together with the smell of the ocean added a nice touch to this spot of paradise.

We settled into our accommodation at the Arawa Transit Lodge along with an American crew filming a story about crocodiles for Animal Planet. They didn’t have any live specimens but had stories to tell about the ones they wrestled. The Lodge was modest with 10 basic guest rooms. The grounds are well kept, the staff great (thanks Kelly) and the facilities clean. Oh.. and a resident puppy, some very large moths and various other forms of tropical life. This was home for the next 4 nights.

The first day of the Bougainville chocolate festival was held in Buin – in the southern region of Bougainville. Our journey from Arawa to Buin took 3 hours each way by four wheel drive vehicle. The trek took us through rough terrain and unsealed roads, meter deep river crossings, potholes the size of bathroom sinks, dogs darting in front of the vehicles, bridges, (both intact and partially collapsed) which we crossed, beautiful sceneries of beaches, mountains and forests. We could even see the Solomon Islands from one hill. 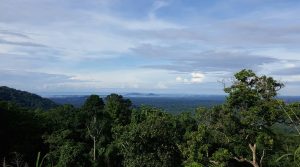 Solomon Islands in the distance 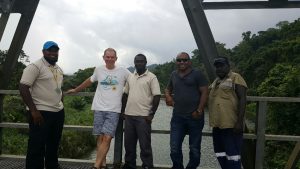 As the only ‘chick’ in the travelling party, I got to sit in front with the driver while the others endured the bumpy ride in the back of the Toyota troop carrier for the whole six hours. Despite this, everyone was good natured and joked and bantered. The boys teased me about going snorkeling in my bikini. As my days of bikini wearing were over, I suggested they might like to don bikinis instead….!!  This was a basis of many jokes and banter for the rest of the trip.

On the second day of the festival, held in Arawa, we attended a seminar where farmers were given feedback about their cocoa beans which had been made into chocolate and judged by the three chocolate experts from Australia. The farmers were given several tips on how to improve the quality of their beans. The judges then provided them samples of chocolate made from good and poor quality beans to demonstrate how important it is to process the beans correctly. This was a first for many of the farmers who clearly appreciated the messages coming from their end consumers. The main take home messages for the farmers were to ‘eliminate smoke’, ‘ferment properly’ and ‘dry correctly, preferably with the sun’. 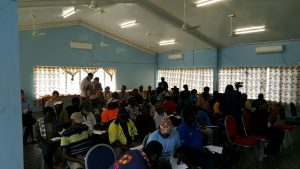 It was a valuable session for us too as we got to hear about the farmers’ concerns on how to best dry their beans and what the optimal fermentation technique was. With the seminar over, we then got to meet the individual farmers and make connections with those who had produced the best quality beans. It was indeed a worthwhile experience and we are looking forward to working with those farmers to make a unique Bougainville chocolate.

Both days of the festival proceedings in Buin and Arawa were colourful events attended by farmers, stall holders, politicians, Australian Government officials, researchers, townfolk and a sprinkling of tourists. There was a great vibe on both days of the festival, with some fantastic traditional dancing and music. 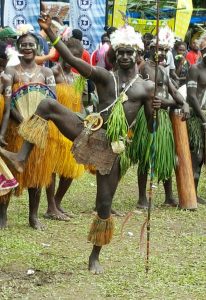 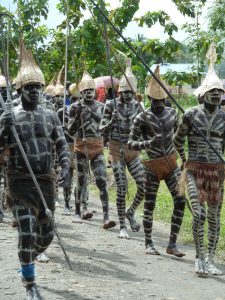 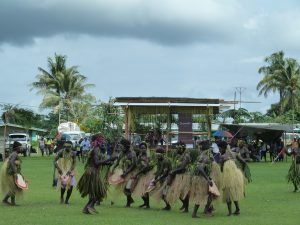 The carnival like atmosphere was only interrupted by the thunderstorms that fell at the Buin festival. Even that did not stop the local children running around in the wet and slip-sliding in the mud enjoying themselves.

After the official proceedings of the second day, we visited a cocoa farm in the area and a buying centre where farmers brought their beans to sell. These were then loaded into shipping containers for transport, mostly to Port Moresby. This day concluded with the post festival official barbeque at Tunuru beach where a ‘mumu’ was served after the guests of honour were officially welcomed, blessed and anointed. This was a traditional feast of meats cooked over stone fires served with a range of root vegetables. For most of the night we were entertained by the Amiong cultural group; with their music, singing and dancing. The feast was absolutely delicious and everyone had a great time. Who wouldn’t..? We had just attended a successful two-day chocolate festival, were on a beach that was like paradise, enjoying a traditional feast and being entertained by South Pacific musicians, singers and dancers. This is the stuff you see in movies! 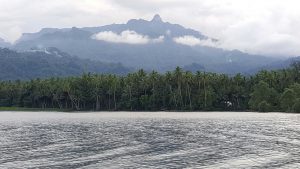 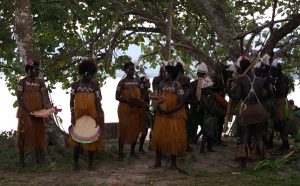 Our last full day was spent meeting a few more people who were very keen to see a strong resurgence in the cacao industry on Bougainville. We also took a short banana boat ride around the nearby islands (Papaya Beach and Pok Pok Island) where we swam and snorkeled in the crystal clear water in this beautiful paradise. It was another brilliant day. 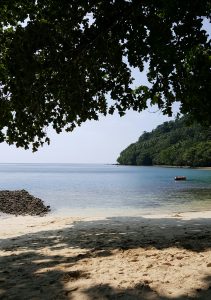 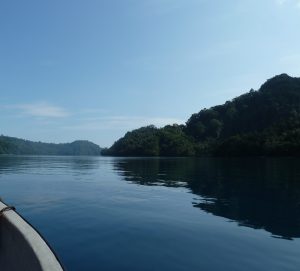 As I close off for the night I reflect on what has been an unforgettable and fantastic few days in the island paradise of Bougainville where the people are all genuinely friendly and happy; the weather is excellent; and scenery stunning. I am also happy to dispel the myth that it is dangerous for tourists in Bougainville. At no time, did I feel unsafe in Bougainville or in Port Moresby.

More to the point, everyone we met spoke positively about the chocolate festival

– how it helped the cocoa farmers understand the end use of their product,

– how it was a good opportunity for Bougainville to show the chocolate world its potential.

Oh and don’t tell him ….but all the things Peter had said about why we should visit the inaugural Bougainville Chocolate Festival came true! Gosh, believe you me, I’ll never hear the end of this!!!

Tomorrow will be spent flying back to Port Moresby on a somewhat shorter ‘milk run’ flight I am informed. There we will be meeting with my contact in PNG from the Cocoa and Coconut Institute, James, who I had purchased my first shipment of cacao beans.

On Saturday, we reluctantly head back to our home in freezing Canberra. Hmmmmmm ..??….

As a small footnote, all government agencies did a great job to get the festival organised and run so well, congratulations. Our main contact was through the team at ACIAR and so we send a very special thanks to them; Peter, Emily, Sheerah, Erin and the ever shy and quiet Grant (if it wasn’t for your shirts, Grant, we would hardly notice you). Last but not least, Zhon and his team at Bougainville Experience Tours were just fantastic showing us the sights and taking us around. 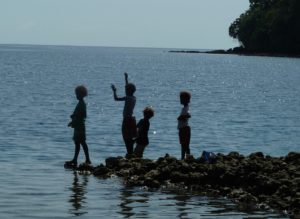